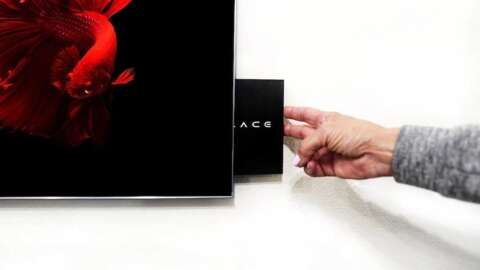 Displace announced at CES what it calls “the world’s first wireless TV,” with the first model shipping in December 2023.

The Displace TV model is 55 inches and runs on batteries that Displace claims are both long-lasting (around a month if you’re using the TV six hours a day) and replaceable. The TV does not need to be wall mounted, as it has its own suction pump apparatus attached to the back. For example, it enables playing on almost any surface, including a window. The TV does not have a remote, instead relying on gesture control, which the TV reads via the overhead camera. You can also control the TV with your voice or by touching the screen.

It transmits the content from the hidden processing box to the TV. It can play multiple TVs from the same box, it can transfer content from TV to TV when you switch rooms or combine multiple TVs into one big screen. A TV costs $3,000, with a two-pack retailing for $5,400 and a four-pack for $9,000. You can. Reserve copies today. For ten percent of the total price. However, with a promised ship date of December 2023, only a total of 100 models were available to reserve.

LG also announced a wireless TV at CES., which works through a similar system, though it comes in 97-inch, 83-inch, and 77-inch models. Pricing and more details are yet to be revealed.