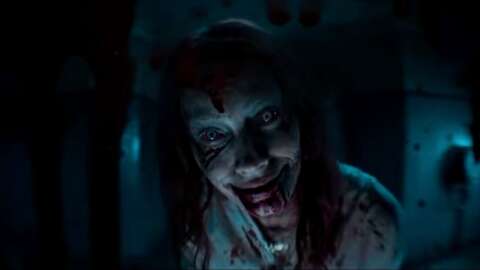 Warner Bros. has released the first red band trailer for Evil Dead Rises, the fifth installment in the franchise. The film will hit theaters on April 21.

A synopsis reads: “In Evil Dead Rises, street-weary Beth meets her older sister Ellie, who is raising three children on her own in a cramped L.A. apartment. Deep in the bowels of Ellie’s building A mysterious book, which spawns demons in flesh, plunges Beth into a primal battle for survival as she faces the most terrifying version of motherhood.” Note that this Red Band trailer isn’t just marketing — as writer-director Lee Cronin said last year when production wrapped in October 2021, About 6,500 liters of blood in the film.

The film is produced by series creator and horror icon Sam Raimi, and Bruce Campbell — who appeared in every episode of the original trilogy — joins as producers. While promoting the trailer, Campbell said A video released on Twitter that “even though I’m not in the movie, as a producer, I’m like a cheap suit in the movie, I guess you could say I have a hand in it.”

Evil Dead Rises has endured a production process created by Pandemic. It was originally announced as in development in 2013, and after many years and twists and turns — and a lot of rumors — the film will hit theaters this spring.