A Rohingya mother and her five-year-old daughter have been found among 200 people rescued after nearly a month on a boat in Indonesia.

Mohammad Rizwan Khan, a Rohingya refugee living in a camp in Bangladesh, told Sky News that his sister Hatmonisa and his niece Umm Salima were rescued by Indonesian authorities on Monday.

They were among about 160 Rohingya who left Bangladesh for Malaysia aboard a large boat in late November, stranded after its engine failed.

Men, women and children were rescued from a broken wooden vessel on Boxing Day after they washed ashore in Ujong Pai, Aceh province, on the northwestern tip of the Indonesian island of Sumatra.

The United Nations High Commissioner for Refugees (UNHCR) said that Indonesian fishermen and local authorities Saved more than 200 people Tomorrow between Sunday and Monday, the majority of whom are women and children.

Without supplies and abandoned in the middle of the sea, many reportedly starved to death during the perilous journey, but Hatmonisa and her young child were among those who survived.

Mr. Rizwan Khan said that he was crying when he managed to talk to his family on video call, who could not be contacted for a month.

Read more:
Myanmar soldiers have admitted to raping and killing Rohingya people.
Angelina Jolie meets refugees in Bangladesh.
‘They killed my son in front of me – then they all raped me’

“We felt like we found a new world today,” she said, adding that both mother and daughter looked exhausted.

She explained that her sister decided to embark on the perilous journey because of the poor conditions in a refugee camp in Bangladesh and hoped to find better opportunities for her daughter in Malaysia.

I A phone call on December 18a man on the vessel was heard saying “we are dying here” and “we are starving”, adding that some had already lost their lives.

Those rescued over the past two days were exhausted and dehydrated, and told the UNHRC that as many as 26 people died due to the dire conditions on board. 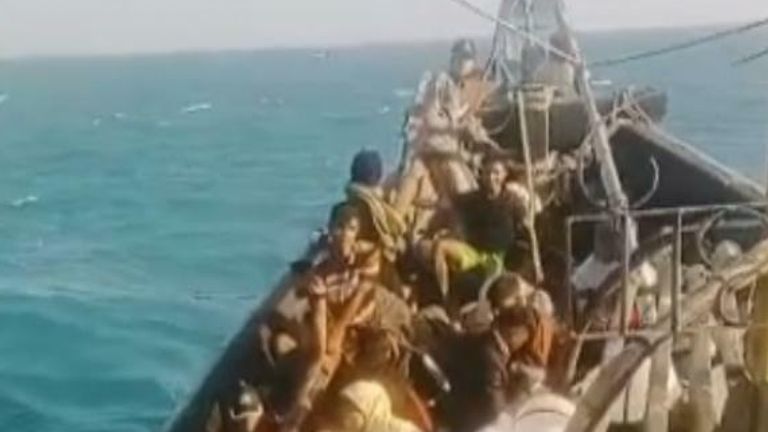 Rohingya refugees are stranded at sea.

The number of people trying to cross the Andaman Sea from Bangladesh and Myanmar has risen sharply this year, with more than 1,900 dead since January, according to the United Nations.

Most of those risking their lives are Rohingya refugees who fled Myanmar in their millions in 2017 to escape persecution by the military.

Myanmar’s security forces have been accused of mass-raping and killing Rohingya people and torching thousands of their homes.