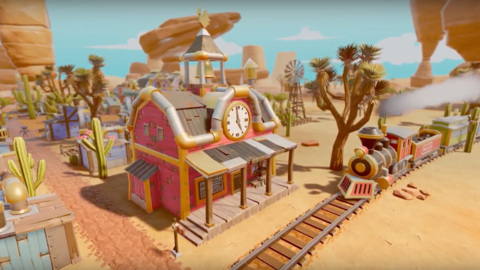 The next game in the SteamWorld series is another radical departure from its predecessor: a frontier city builder called SteamWorld Build. You’ll build a bustling wild west city above ground, mining and dealing with monsters that lurk just below the surface. SteamWorld Build is coming to PC, PS4, PS5, Xbox One, Xbox Series X, and Nintendo Switch in 2023, and a demo is available now on Steam.

As the mastermind of a SteamWorld mining town, you’ll build homes and provide food for your citizens and make sure they stay entertained. Meanwhile, you’ll need to venture underground to explore an old abandoned mine in search of ancient technology that can save your fledgling community from certain doom. Collect ores and other resources from beneath the earth, and use them to build your city on the surface — with the ultimate goal of getting off the planet entirely.

Publisher Thunderful notes that the game was created simultaneously on PC and consoles to ensure that it all works as well with a mouse and keyboard as it does with a controller. You can also choose from three difficulty levels so this sim builder is inviting for newbies as well as veterans.

Thunderful announced the game as part of its first SteamWorld Telegraph presentation. Brjánn Sigurgeirsson, director of the SteamWorld franchise, said another Telegraph offering will follow later this year, with three more SteamWorld titles currently in development. Sigurgeirsson is overseeing production of SteamWorld Build, and the game is coming from The Station, a Thunderful-owned studio that has previously produced art and assets for various LittleBigPlanet games.

“Having the opportunity to work on an award-winning franchise that fans love was a real honor for us,” said Adam Vasey, producer of The Station. “We’ve put a lot of effort into making sure the game retains the charm of previous entries, but we’re also lucky that the SteamWorld series is about trying new things. SteamWorld and the city builder genre turn to create an intuitive Enummate Dungeon Keeper-style system that we believe is unlike anything else out there.”

except for Demo on SteamThe publisher is holding a Steam World Sale on Steam so you can catch up on past games. The Steam World series is known for everything from action platformers to a full-on strategy RPG called Steam World Quest. SteamWorld Dig is the most popular of the series, and the only one to get a sequel, SteamWorld Dig 2, in 2017.