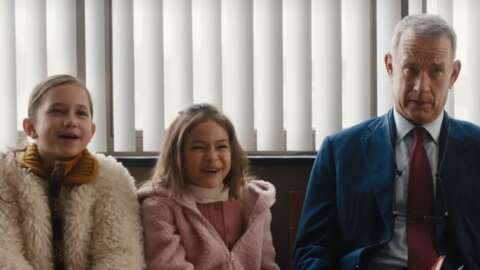 Tom Hanks is the latest celebrity to wade into the ongoing debate about nepotism in Hollywood. In an interview with Britain the sunHanks shared some insight into his family favorite in casting his son Truman in his new film A Man Called Otto.

“Look, this is a family business,” Hanks said. “It’s what we’ve always done. It’s what all our kids have grown up in. If we had a plumbing supply business or if we ran a flower shop down the street, the whole family would spend time here. Even if it was just inventory at the end of the year.” Watch a clip of the interview below.

“It doesn’t matter what our last names are, we have to work to create a real and authentic experience for the audience,” Hanks added.

After a limited theatrical release on December 30, A Man Called Otto will have a wider release on January 13. The film is the second adaptation of Frederick Beckman’s 2012 novel A Man Called Ove, about a grumpy old man living in suburban Pittsburgh. –and a remake of the 2015 Swedish film of the same name written and directed by Hans Holm.

In addition to Hanks and his son Truman — who plays a younger version of Tom — the film stars Mariana Trevino, Rachel Keller, and Manuel Garcia-Rolfo.