Hopes for more survivors are fading from the rubble of an apartment block in the southeastern Ukrainian city of Dnipro – a day after the building was hit by a Russian missile attack.

So far 30 people have been confirmed dead and more than 30 are being treated in hospital, out of which 12 are in critical condition.

Between 30 and 40 people are still trapped under the rubble of the nine-storey block, but city mayor Boris Filatov is pessimistic about the chances of any more survivors.

“Now the chances of saving people are slim,” Mr Filatov told Reuters news agency. “I think the death toll will be in the dozens.”

He said that two staircases in the block including dozens of flats have been destroyed. 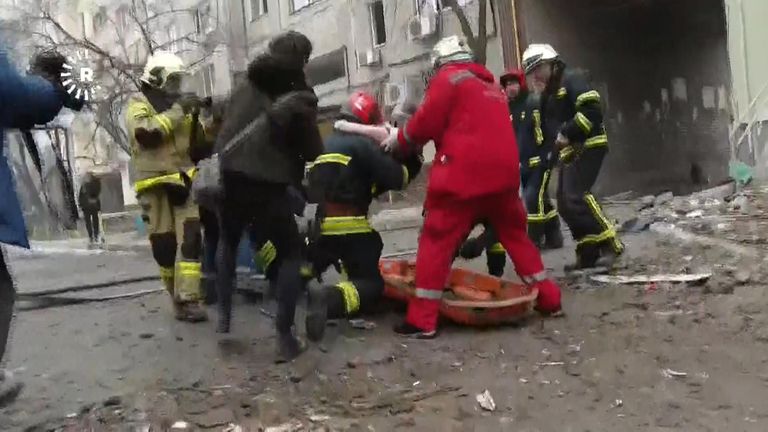 Several people were killed and dozens injured in the attack.

The attack on the Dnipro was one of the deadliest attacks of the war against civilians.

The death toll makes it the highest death toll in one place since a strike in the Zaporizhzhia region in September 2022.

Ukraine’s air force said the bloc was hit by a Russian KH-22 missile, an antiquated weapon that appears to be inaccurate and that Ukraine lacks the air defense capability to shoot down. The Soviet-era missile was developed to destroy warships during the Cold War.

During the rescue operation on Sunday, emergency workers heard people’s cries for help from the wreckage and waited for a moment of silence to direct their efforts.

Firefighters found a woman alive 18 hours after the attack, safely carried in their arms. A body was then lifted from the ruins on a stretcher by a crane.

Read more:
At least 30 people were killed in the Dnipro apartment block collapse.
Britain has revealed for the first time the number of tanks being sent to Kyiv.
The mining town where Putin is hoping for his first victory in months.

Russia has not specifically acknowledged the attack, but its defense ministry issued a statement saying it had launched a wave of missile attacks on Ukrainian infrastructure and military sites.

“All assigned targets have been hit,” the statement said. “Strike objectives have been achieved.”

In his nightly address, President Volodymyr Zelenskyy vowed to continue the search for survivors of the Dnipro attack.

“Search and rescue operations and removal of hazardous structural elements are ongoing. Round the clock. We continue to fight for every life.”

He called on Western allies to provide more weapons to end “Russian terrorism” and attacks on civilian targets.

Saturday’s attack came as Britain followed France and Poland with more weapons pledges, saying it would send 14 of its Challenger 2 main battle tanks and artillery support.